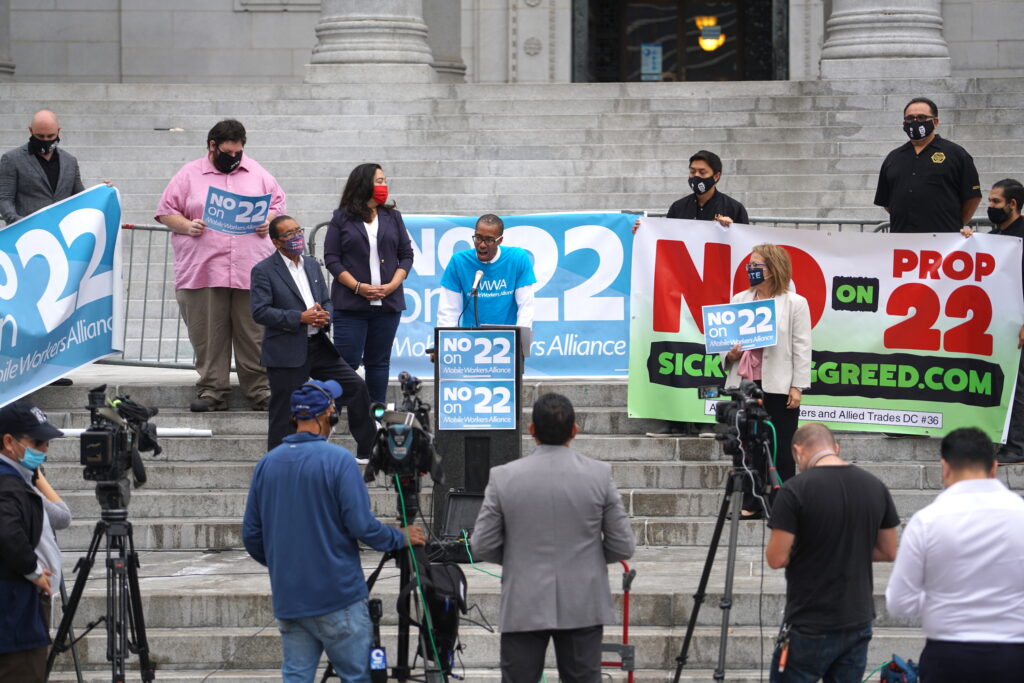 Los Angeles leaders stood this morning on the steps of L.A. City Hall with ride-share drivers, like Jerome Gage (pictured), as they outlined the ways Prop 22 would hurt them and their fellow workers while urging Angelenos to vote NO on Prop 22 on the ballot this election, $185 million ballot initiative that would let gig companies rewrite California labor laws to continue exploiting their workforce.

“Rideshare giants like Uber and Lyft have spent hundreds of millions of dollars to muddy the water on Prop 22 so they can avoid paying workers their fair share,” said Los Angeles Councilmember Herb Wesson.  “Prop 22 eliminates access to, or dramatically narrows, nearly all existing employment laws for app-based transportation and delivery workers, including laws prohibiting employment discrimination and ensuring equal pay. If you believe working full time should entitle you to a living wage and affordable healthcare, vote no on Prop 22.”

“They (gig companies) are trying to change laws that have protected workers over 100 years,” said CA Senator Maria Elena Durazo, (SD-24). “Workers compensation was passed in California 107 years ago and Uber and Lyft want to eliminate that protection. They want to deny their drivers rights like paid sick leave, unemployment benefits, and a workplace free of discrimination and sexual harassment. They want it because they are worth $75 billion and they want more. Shame on them for putting the money in their pocket instead of paying their fair share as employers in this state.”

“The vast majority of drivers work more than 30 hours a week and when app companies threaten to halt ride services, many will be without a job. It is completely incomprehensible to be denied an opportunity to work, and during COVID, an opportunity for unemployment,” said CA Assemblymember Wendy Carrillo, (CA-51). “…I use the technology and I want to be an ally with a company that sees workers as human beings; that pays their fair share of taxes; and that we as a state of California continue to support technology and the advancement of where our world is going but at the same time, hold these companies accountable to make sure they pay their fair share in taxes, they are paying into unemployment, and that they are not diverting any kind attention to the lies they are currently telling workers. Enough is enough. We are here to say no on Prop 22.”

“Prop 22 is an attempt by billion-dollar companies like Uber, Lyft and Doordash to roll back even the most basic rights and protections for workers,” said James Wiest, a member of Mobile Workers Alliance who has driven for Uber, Lyft, and Postmates for seven years. “If you care at all about things like the minimum wage, access to healthcare, the 40-hour workweek, unchecked corporate power, or the ability for workers to have a say on the job – then you must vote no on Prop 22.”

“Prop 22 would allow the companies to pay us as little as $5.64 an hour with no sick days, no workers comp, no unemployment, no affordable health insurance, nothing,” said Jerome Gage, Lyft driver and member of Mobile Workers Alliance. “Make no mistake, Prop 22 isn’t good for anyone but gig company executives and their investors.”

The companies’ $204 million ballot campaign is now the most expensive in California history — yet according to a new poll, California voters remain split on the initiative, with strong opposition from Democrats and Latinos.