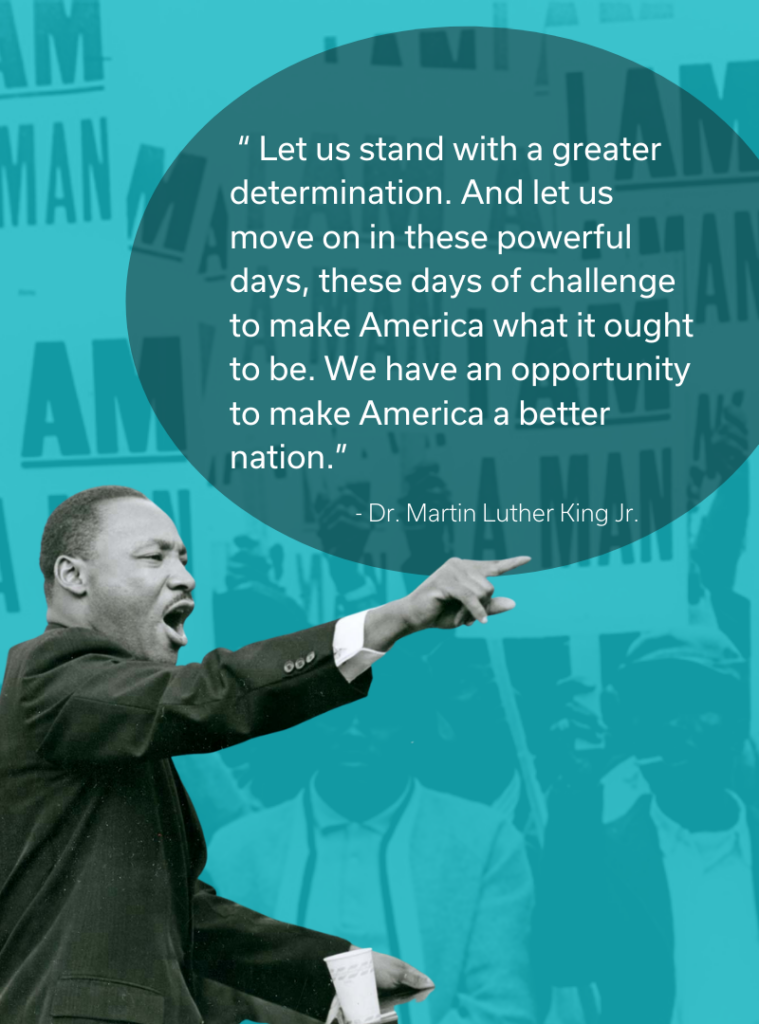 Happy Martin Luther King Jr. Day to you and your family. Today is a day to pay tribute to the life of a man who stood tall among giants and steadfast in the face of danger and injustice.

We celebrate the progress and change that he helped inspire and the generations of Labor leaders who followed in his footsteps. But it is difficult to see the day as we have before. We must look at it from the perspective of a society that continues to experience a global pandemic.

And what do we see now? We see a nation in an economic crisis of inequality, where the top one percent own more wealth than the entire middle-class.  More wealth than the bottom 50% of Americans.  We see a world that celebrates CEO’s and the numbers on a spreadsheet while taking away the rights of workers whose work created that company. We see a world that would put the lives of workers second to profits, taking away the rights and protections of those who need it the most.

Even in this new lens, we still view the issues of generations past.  Right now, hundreds of laws are working through our legislature to stop workers from voting, disproportionately impacting Black Americans and communities of color. The legacy Dr. King built with the Voting Rights Act is under attack across the country and it will take all of us to step up and save our democracy.

Working families today want what they have always wanted, the American Dream: the right to have a job with fair wages and benefits, to keep their family healthy and safe while keeping a roof over their head and food on the table. Our fight is the same fight as Dr. King’s fight.  It is a fight for civil rights, the fight for dignity, respect, and a Union!

But let’s not be bleak. The answer to these issues is one at the center of our movement and the heart of every movement that came before us. We must organize! Our collective power will bring about the change that we seek and there is no doubt that workers are taking notice.

Across our country, we see examples every day with workers standing up to injustices. Service workers at fast-food restaurants have held walkouts, demanding fair wages and protections on the job. Starbucks workers persisted against intimidation in their path to have a union in their workplace, sparking a wave of workers in hundreds of locations following in their footsteps. Kellogg’s workers held an almost three-month strike, fighting off a two-tier system that would hurt new workers. Sanitation workers in Orange County went on their first strike in almost two decades to win a fair contract and respect on the job. Even now, almost 170 workers, mostly Spanish-speaking women, at Jon Donaire in Santa Fe Springs continue their over two-month strike fighting for a fair contract that includes decent wages and the end to dangerous workloads.

On April 3, 1968, Dr. Martin Luther King Jr. delivered a speech in Memphis, TN in support of striking AFSCME sanitation workers where he said, “The question is not, ‘If I stop to help this man in need, what will happen to me?’ ‘If I do not stop to help the sanitation workers, what will happen to them?’ That’s the question. Let us rise up tonight with a greater readiness. Let us stand with a greater determination. And let us move on in these powerful days, these days of challenge to make America what it ought to be. We have an opportunity to make America a better nation.”

I call on our leaders to support worker protections such as paid sick leave for all workers, to sideline the filibuster, and to not only protect, but expand voting rights for every American. That, my sisters and brothers, is the spirit of MLK Day.  That is how we fight for workers.  And that is how we win the battle of moral conscience.